' Since the 2000-01 season adidas have been providing the official match balls for the UEFA Champions League Final and the Finale X is the' Tenth in this prestigious series.

The new Finale X in action, complemented by the Champions League edition' f50i

The Finale X might not get its on-pitch debut until the 22nd of May but it can be yours from the 15th of April, and available for pre-order now.

Building on last season’s' Rome match ball, the new Finale X might not be what many fans were expecting.

Rather than carry on using the Teamgeist design, which adidas have been using since 2006, many suggested the new design would incorporate the revolutionary design of the' Jabulani.But, as you can see, adidas have really pushed the envelope with the Finale X to celebrate the tenth incarnation.

20 panels based on the Champions League Star Logo, (rather than the' Jabulani‘s unique panel design) mark the first time that adidas have successfully managed to make star-shaped panels without compromising on durability or flight!

What you will also notice about the Finale X is that adidas have incorporated' dimbles on the ball, similar to the' Grip ‘n’Groove tech (that Greeny & Sully loved so much on the most recent' Footy-Boots Show) that made its debut on the latest World Cup ball.The Colours for the new Champions League Final ball are inspired by the city of Madrid, the Gold for the Royal family, Red for Spain and the Blue inspired by the seats of the Santiago Bernabeau itself! 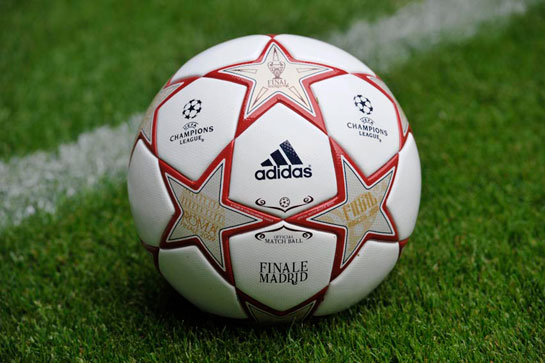 The Finale X up-close: Check out the detail on the Star-shaped panels!

To top it off, on closer inspection you’ll see each ‘Star’ contains an image from the last 10 Champions League Finals! Now that’s really pushing the boat out!'

Also, an interesting fact; carrying on from last year – the Winners of the Champions League get exclusive use of the Adidas Finale X for all their home games for the following year. Aside from the massive TV revenues and sponsorship bonuses, that’s a pretty nice bit of swag!

Written By
Felipe
More from Felipe
They've been bed fellows for 12 years but is the Brazil /...
Read More