Clint Dempsey has been a model professional from Nike over his entire career – wearing almost every pair of football boots the Mercurial Vapor range – even celebrating them in his 2006 Don’t Tread song! 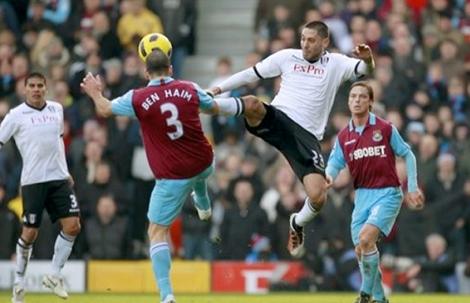 So, when Footy-Boots caught up with the versatile attacker at the final of Nike’s ‘The Chance’, we only had one question we wanted to ask him: why did he spend most of December in the T90 Laser III?

Dempsey was only too happy to comply, revealing exclusively to Footy-Boots:

“It was a comfort thing, at the time I was dealing with bruised toenails – in fact one of the nails was falling off – so I just wanted to try something a little more comfortable!”

Not the most pleasant of reasons for a quick change of football boots, we’re sure you’ll agree!

However, it does go to show two things; that Pro’s really do feel their football boots can help their game, and that Clint Dempsey won’t even let his toenails falling off stop him scoring for Fulham! Definite hard man!

The tough Texan was keen to let us know that the Vapors are always his boot of choice, saying “The last 3 or 4 games I’ve gone back to the Mercurial Vapor. I’ve always liked the Vapor – you feel a little bit lighter than the T90’s, a little bit quicker so you can go without being as comfortable.”

Would Clint ever go back to the T90? “I like the Vapors, I don’t think I’ll change back.” 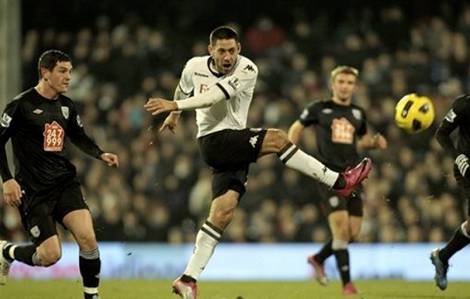 Dempsey back in the Superfly II

And why would he? Clint’s got a lot of good memories in Nike’s speed boots, especially since the launch of the Superfly – who could forget that goal against Juventus? The First competitive goal scored in the Superfly II – surely that was a deft piece of skill worthy of such high-profile football boots?

“I’ll be honest with you – I didn’t know where the ‘keeper was! I just took a chance and it came off! You watch the replay – I had my head down the whole time!”

But one pair of football boots that we really wanted to talk to Clint about were his custom ‘Don’t Tread’ Superfly I‘s -'  and the Fulham midfielder was really keen to share his memories of them!

“It was real cool – the whole Don’t Tread thing happened in ’06, they wanted me to do a track for the campaign, and that’s all it was going to be – just a track.” the 27 year old recalled, “It snowballed into something bigger, the whole campaign was based around the ‘Don’t Tread’ message; do your thing, don’t hate – you know what I mean?”

The campaign was huge for Nike, running from the World Cup in 2006 to the US World Cup qualifying campaign in 2009 – as you know most campaigns are lucky if they last 6 months, so 3 years is a testament to Clint and the rest of the United States Mens National Team.

“It was great to be able to wear a shoe that was so limited” said Dempsey'  “And to represent something that showed you were part of the campaign from the beginning – that’s what was so special. White, Red and Black are my three favourite colours, they’re very special to me – it’s a shame I didn’t get to wear them more over here!”

And where does Clint keep his cleats now?

“The first pair of ‘Don’t Tread’s had my daughter’s name put on them so they’re in her room now.”

All together now; ‘Awwww’…

And on that, Clint had to head onstage to give one last talk to the gathered 100 ‘The Chance’ finalists, so we wished him all the best and let him on his way – thanks again to Clint and the Nike Football team for giving us time to talk football boots!

Written By
Kyle Elliot
More from Kyle Elliot
England Striker Darren Bent will take to the pitch this weekend in...
Read More